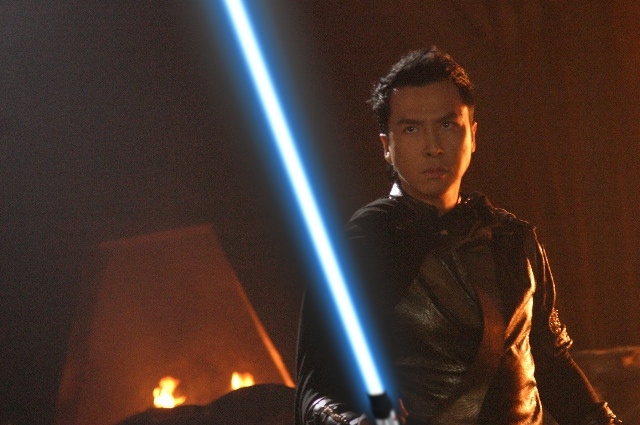 Hong Kong action star Donnie Yen, also known as Yen Ji-Dan, has been rumored to be joining at least one upcoming Star Wars films, but there is a chance he will be appearing in at least two. In case you’ve been living under a rock, Yen is an actor, martial artist, action choreographer, and multiple time Wushu Tournament Champion. He has started his movie career as a stunt man in Shaolin Drunkard (1983) and has starred in multiple films and choreographed many fight scenes for multiple movies and video games.

According to the Hong Kong tabloid, and The Daily Apple, Yen is scheduled to fly to London as soon as next month to start filming. At this point, Episode VII is wrapped up, so needless to say, it would be excluded from the possible movie(s) he’ll make an appearance. The initial belief is that Yen will appear in Rogue One, which is being billed as the first Star Wars movie that will have little to no mystical elements. This comes at the heels of Rogue One director Gareth Edwards reportedly courting quite a few Asian actors, to appeal to Chinese audiences that are part of a booming market for blockbuster films a la Transformers: Age of Extintion.

Another possibility that is being discussed around the rumor mill is that Yen will make an appearance in Episode VII. He is also being reported, by the Daily Apple, to be starring with Harrison Ford. This would dispel rumors that none of the original cast will be seen after Episode VII (****FINGERS CROSSED****) It is being predicted that he will be playing a Jedi Master who will be interacting with Han Solo in some capacity.

Let’s be clear. none of this information is concrete. American movie outlets are all but ignoring this possible tidbit of news because it is being reported by a foreign tabloid. That didn’t stop this fan boy from geeking out when I first heard rumblings of Yen joining the Star Wars family. He has the perfect set of skills that should allow him to easily fit into any type of JedI role. I will be waiting, holding my breath until that day no matter which actors are involved, but a big part of me yearns to see what Donnie Yen can bring to the Star Wars Universe!